Join us for World Fire Cider Day of Action! 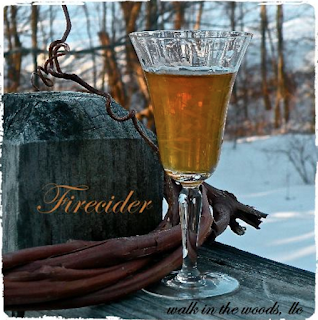 Get ready for World Fire Cider Day of Action! What can you do, you ask? Well, no matter where you are in the world, you can start here:
➽ Learn more and Take Action!
➽ Make yourself a big batch of fire cider!
➽ Sign the Petition!
➽ Flood the Market ~ sell your own version of Fire Cider!
➽ Support the Boycott call stores in your area and let them know about the issue.
➽ Donate to the legal fund to support the amazing legal team! 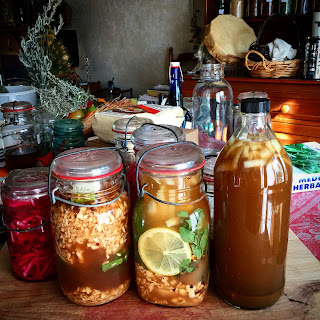 I'll be starting my day getting fired up with a shot of Fire Cider, and then straining some versions I started before the ground froze a couple months ago. I may make a bean soup and add a shot of it... and a salad with olive oil and Fire Cider. Oh my... so Good and Good for you! 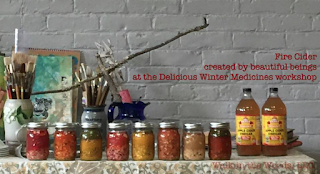 And in the evening I'll be hosting a Free Fire Cider Action & Education Potluck at my Walk in the Woods studio in sunny Winsted, Connecticut. Join us if you're in the area!

rose
Walk in the Woods, LLC

Posted by rose of Walk in the Woods - she/her 2 comments: 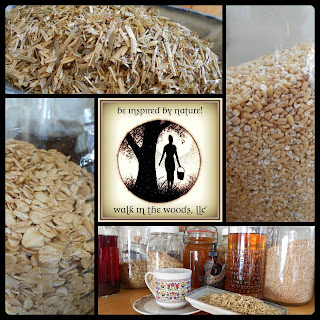 Avena is a genus of some 30+ species, commonly called oats, which have been cultivated for thousands of years for food for two and four leggeds.

Actions: Nutritive, nervine, relaxant (some say sedative) - one that can enhance alertness (so it’s sometimes seen classified as stimulant – because of its nutritional actions), emollient, demulcent, rejuvenative, tonic (to the endocrine system, with an affinity to the adrenals, esp. in milky form, and to the digestive system and the integumentary system). It is sometimes noted as adaptogenic, antidepressant, antispasmodic, aphrodisiac, anti-tumor/cancer, diuretic, neurotonic. It’s credited with reducing cholesterol levels and so is considered supportive to circulatory functioning.

Composition: Hollow stems, plugged at intervals with leaf-bearing nodes. Leaves are usually alternate with parallel veins. The leaves are often hardened with a form of silica making them stiff, rough, and sometimes sharp, which discourages foraging and grazing. The flowers are most often arranged in spikelets and are usually hermaphroditic (possessing male and female components and self-pollinating), with the exception of maize, which is anemophilous (wind pollinated). The fruit is called a caryopsis, meaning a simple fruit, one that we call grain.

Constituents: Carbohydrates, silicic acid, protein, flavinoids, saponins, alkaloids, and more. Rich in calcium and other minerals and vitamins too.

Contraindications: None, unless you are allergic oats, celiac, sensitive to gluten. So far, both research and experience demonstrate that gluten sensitivities aren’t triggered by using oat straw on the skin.

With respect to gluten, Henriette Kress says it best: “While oats doesn't by itself contain gluten, "normal" oats usually contain minute amounts of glutenous grains. This could be because of crop circulation (growing one grain after another means that some of last years crop will grow this year as well), because of the harvesters and grain storage not being completely cleaned between crops, or because the mill doesn't take care to clean out all gluten-containing grains. Whichever it is, gluten-sensitives do well to avoid "normal" oats.”

Some say Avena should be avoided during pregnancy and while breast-feeding, though this seems counter intuitive and intellectually contrary to me.

Medicinal use: Rich in calcium, phosphorus, and potassium and other nutrients, oats are good Food and Food is Good Medicine. Oats offer respectable nutrition and help to nourish the debilitated nervous system. As a nutritive herb, it is rich in silica, carotenes, and folic acid and is a good source of antioxidants and chlorogenic (phenolic/protective) acids.

Often referred to as an adrenal tonic by contemporary herbalists, it has proven itself, time and again, as a reliable ally for those who are exhausted and for convalescence. I’ve found it to be a sound ally during times of mental/emotional/physical stress, especially when tied to grief.

Addiction, anxiety, depression, exhaustion, nervous tension, stress and all similar conditions we understand and experience show how oats (as Food, water infusion, vinegar infusion, tincture and talisman) act as a strengthening tonic for mind and heart (and then some).

Oats are soothing & nourishing, used internally and externally, helping to calm pain from damaged nerves and to nourish the regeneration of damaged bones, lung, and muscles, and generally support healthy tissue growth throughout the body.

Nervous System: Avena is sometimes referred to as a nerve tonic, though I find that the references to “nerve tonic” point not to the physical aspect, but rather to the subtle associations of the nervous system … such as insomnia, depression and anxiety. I’ve found it, in all its forms, from tea to tincture, to subdue irritability and the resulting behaviors. Know what I mean?

Renal System: Oats are credited with prevention of scrofula, prevention of gravel and stones in the bladder and kidneys, clearing to urinary congestion. This sings the song of Food as Medicine to me.

Integumentary & Skeletal Systems:  Oats support and strengthen the bones and tissues, including veins, strengthening their connective tissues & increasing their flexibility. Avena is cooling and soothing to dry, itchy skin. For years I used a long-brew infusion to add to my baths (and to sip while bathing) to manage my “winter skin” which was a significant challenge during my corporate days, working in those horrid-dry “environmentally controlled” buildings.

It’s a nutritive addition to the diet as it is rich in silica, which is necessary for building the outer layer of skin, hair and finger/toenails. Oats, in all forms can harmonize hormones, protect adrenal glands, support the thyroid, and improve the strength of veins. It’s also credited with powers to increase the libido, as any notable nutrient-rich Food/Medicine should! Oatstraw infusion can be an ally while taking the L Dexamethasone (Decadron), use to counter the side effects from chemotherapy, which can cause excessive energy followed by exhaustion. It’s supportive to many in easing hot flashes, frazzled nerves and other menopause “symptoms” (infusion or tincture: 25 gtt. bid). Micheal Moore lists: Angina pectoris, as an adjunct for fear of death, constant guarding against pain; Functional neurocirculatory disorders; To prevent anxieties when insomnia is feared; General insomnia in sthenic individuals; Narcolepsy; Menopause, with sense of pressure and pain in ovaries, uterus, sacrum, bladder with nervousness and sense of confusion; or with melancholia after hot flashes; Premenstrual syndrome (PMS), with easily startled disposition, easy adrenergic discharge, jumpy; Appetite poor, nervous, weak (with Trifolium); Hysteria with adrenergic-induced exhaustion.

Chakra association: I’ve not yet settled on a single chakra, as oats – in all of its parts – seem so supportive to us – in all of our parts – the whole body and being.

Culinary use: Nutritional infusions, Nutritional vinegars. All manner of cooking and baking. Oat straw as a Tisane/Tea.